National TeamsNational Team ANewsGrzegorz Krychowiak: It was the most important match of the season! Back

Grzegorz Krychowiak: It was the most important match of the season! 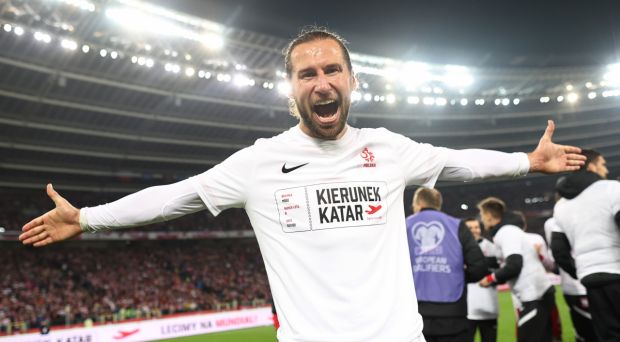 When Grzegorz Krychowiak came out onto the pitch in the second half, it changed the course of Poland's match against Sweden for the promotion to the World Cup in Qatar. It was Krychowiak who was fouled in the penalty area and received a penalty kick which Robert Lewandowski converted, thus scoring the first goal of the match. "Everyone worked hard to get to the World Cup. This team is made up of fantastic players. It hurt a bit that I wasn't in the starting eleven but this is a consequence of the war, which prevented me from preparing properly," said the Polish national team midfielder.

"It was not an easy match. The opponent was very experienced. We did not come out onto the pitch weak at the knees, we showed character. In addition to the sporting and tactical aspects, the mental aspect also plays an important role. It was important not to concede a goal because that is of great importance. When we prevented our opponents from scoring a goal, we felt confident, we knew that it was our match and we would advance to the World Cup. The atmosphere was fantastic and that's important because, during a match like this, a match for promotion, the outcome often depends on the details. It is much easier to play with such support and I'm grateful to the fans for their fantastic cheering. Without them, it would have been even more difficult in those difficult moments," emphasised Grzegorz Krychowiak.

The 32-year-old midfielder watched the first half of the final play-off against Sweden from the substitutes' bench. During half-time, coach Czesław Michniewicz made a substitution – he took off Jacek Góralski, who was substituted by "Krycha". Moments after he came out onto the pitch, the AEK Athens FC player took part in an action that ended in a penalty kick for Czesław Michniewicz's team.

"Anyone who comes out onto the pitch as a substitute wants to show the coach that he has made a mistake. It was a difficult moment for me because I wasn't in the starting eleven. My reaction was important here. At a time like this, you have to support the team and not wave your arms about. I wanted to prove to the coach that I deserved to play. It was the most important match of the season for us. It did not go as expected in the first half, although we had some good moments. We are aware that we have to improve or else we won't get far in the World Cup," said Krychowiak.

"Many people ask what were the consequences of not wanting to play in Krasnodar. The fact that I started the match on the substitutes' bench was precisely one of them. I didn't play or train for two weeks. That is why this success feels so good. The coach has done a fantastic job in a short amount of time. Not only at the national team training camp but also before, when he visited and talked to the players. This had a positive impact on us. We are all aiming at the same goal. We all succeed and lose together. For me, the most important thing is what the coach thinks. I can feel that he trusts me, he told me himself that he counts on me," concluded Grzegorz Krychowiak.