AssociationNewsOne T-shirt – many dreams! Poland's new national team outfits for the World Cup in Qatar Back

One T-shirt – many dreams! Poland's new national team outfits for the World Cup in Qatar 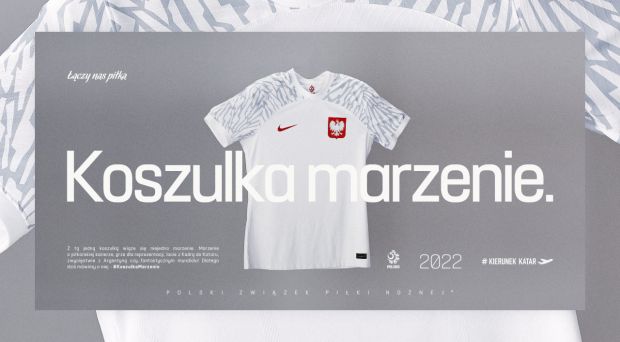 The Polish Football Association has unveiled, in an official promotional spot, the new T-shirt of the Polish national team in which the White-and-Reds will perform at the upcoming World Cup in Qatar. The #DreamT-shirt is another element of the campaign to promote the national team's performance at the World Cup. Czesław Michniewicz's team will play in their new T-shirts already in September's upcoming Nations League matches against the Netherlands and Wales. The T-shirts were produced by Nike, the official supplier of the Polish national team's sports equipment.

There are many dreams associated with this single T-shirt. Dreams of a football career, playing for the national team, flying with the team to Qatar, winning against Argentina or... a fantastic World Cup. That is why we now refer to it as the #DreamT-shirt.

"The Polish national team T-shirt is one of the symbols that unite the whole country. It should express the dreams of every single fan. Already on the day of the official presentation of the new T-shirt, it can be said that it is becoming known as 'historic' due to the landmark event of the World Cup, played for the first time in history in November/December. I would like the new T-shirt to remain in the fans' memory long after the World Cup so that it also has a collector's value. This would mean that our team would be successful in Qatar. And this is my private dream related to this beautiful T-shirt," says Cezary Kulesza, President of the Polish Football Association.

The new T-shirts combine white and red as well as grey on the sleeves, which symbolises the white eagle's nest. The shirts, kept in classic tones, correspond to the latest trends, aiming to meet the high expectations of every fan of the Polish national team, regardless of gender, origin, profession, age or place of residence. One T-shirt expresses the millions of dreams associated with our national team's performance at the World Cup. As of today, every fan of the White-and-Reds can buy new national team outfits in the Official Fan Shop of the Polish National Team, both online at Sklep.LaczyNasPilka.pl and in regular shops. The T-shirts were prepared in three models differing in the level of sophistication and technology used.

"The presentation of the national team T-shirt is our strategic point in the entire #HeadedForQuatar campaign, which we launched in March, immediately after winning the play-off match against Sweden at the Silesian Stadium. That match was watched by more than 6 million fans. I am sure that even more will be watching during the World Cup, as the White-and-Red national football team is the most loved team in Poland. We want the new T-shirt design to appeal to every generation of fans. Hence the promotional campaign to emphasise its function not only in terms of football but also in terms of lifestyle," says Łukasz Wachowski, Secretary General of the Polish Football Association.

The Polish national team will play in their new outfits during the upcoming Nations League matches. On 22 September, the White-and-Reds will take on the Netherlands at the PGE Narodowy Stadium in Warsaw and three days later they will play against the Welsh national team in Cardiff. In the group phase of the World Cup, the Poles will face: Mexico, Saudi Arabia and Argentina. The first match, with the Mexicans, is scheduled for 22 November.

"Our slogan is the #DreamT-shirt, because it expresses the dreams and ambitions of all those who support the Polish national team, even if on a daily basis their interest in football is limited to watching matches of the White-and-Red team. What all these dreams have in common is this Polish national team T-shirt, which we put on every time we go to the stadium or watch a match with friends in front of the TV. My dream is for all Poles to be united by the national team during the World Cup," says Grzegorz Stańczuk, Director of Marketing and Sponsorship of the Polish Football Association.