[ALPHABET] Jerzy Brzęczek from A to Z 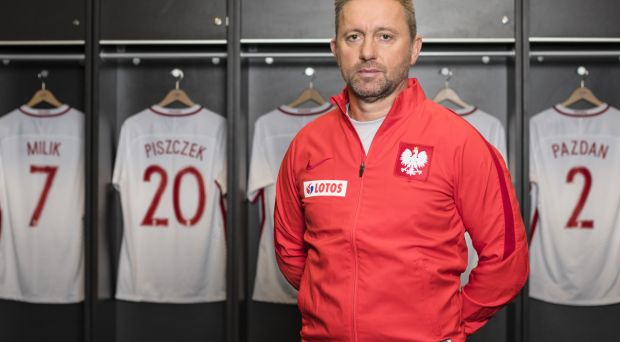 He matured as a player and coach in the same club – Raków Częstochowa. He spent most of his player career running around Polish and Austrian pitches. In Innsbruck, which was his second home for many years, he met the future head coaches of the national teams of Germany and Russia. He was the captain of every team he played for. Welcome to the alphabetical presentation of the new head coach of the Polish national team - Jerzy Brzęczek.

Austria - in the summer of 1995, after several months of playing for GKS Katowice, Jerzy Brzęczek decided to leave the country. After playing for Olimpia Poznań, Lech Poznań as well as Górnik Zabrze, the central midfielder joined the now-defunct FC Tirol Innsbruck. Thus began an adventure of the member of the Polish national team with the Austrian Bundesliga which lasted 12 years, excluding a short break.

Brazil – the 24-year-old Brzęczek was already a respected player in the league and a member of the Polish national team. He scored four goals in the national colours. He waited 10 matches to score his first goal in the senior national team. He scored the first goal in the match in Ribeirao Preto against Brazil, which became the world champion for the fourth time in history a little over a year later. The match eventually ended in a draw (2-2).

Cherchesov – in Innsbruck, which became the second home for the new head coach of the Polish national team, he met the current head coach of the Russian national team and former coach of Legia Warszawa, Stanislav Cherchesov. The Russian goalkeeper joined the team half a year after Brzęczek moved there and he stayed there until the collapse and degradation of FC Tirol Innsbruck in 2002. Both of them spent four seasons in the same locker room.

Debut - Jerzy Brzęczek has positive associations with Austria for many reasons. One of them is the fact that it was against the national team of this country that the current head coach of the Polish national team played his first match in the senior team. The then 21-year-old midfielder was one of the starting eleven and he played for 66 minutes before he was substituted for Leszek Pisz.

Euro – as the member of the national team he took part in the qualifiers for the World Cup and the European Championship but he did not manage to qualify for any major international event in the senior national team. Now he is given another chance, not as a leader on the pitch, but on the substitutes' bench, as the head coach. His task is to successfully lead the White-and-Reds through the European Championship Qualifiers in 2020.

Final - 8 August 1992 at the Camp Nou Stadium in Barcelona. This is when Jerzy Brzęczek played one of the most important matches in his football career – the final round at the Olympics. Thanks to his pass, less than fifteen minutes before the end of the match, Ryszard Staniek was able to tie the match. The home team managed to take away the victory from the Poles in the last minute of the match. The silver medal won that day is the greatest achievement of the new head coach of the White-and-Reds in the national team so far.

Great player and coach – the transition from a player to a coach was very smooth in the case of Jerzy Brzęczek. Already as an active player wondering about his life after hanging up his boots, he was learning the coaching profession from Marek Motyka in Polonia Bytom, dividing his time between the responsibilities of a player and an assistant coach.

Haifa – he gained his experience mostly in Poland and Austria, although there was one exception. He went to Israel for one and a half year, namely to a port city of Haifa, where he played for a local club - Maccabi. He played a total of 37 league matches and scored 11 goals in the green-and-white colours of the then five-time national champion.

Innsbruck – nowhere outside of Poland did Brzęczek feel as good as in Innsbruck. Therefore, it was not very surprising that in the summer of 200 he decided to go back. It soon turned out that it was a great move, as FC Tirol Innsbruck won the national championship with Brzęczek and Cherchesov. They repeated this success also in the following competitions. Interestingly, in the 2000/2001 season, they also enjoyed a title in Haifa. There was something about Innsbruck that made Brzęczek come back again and play a total of over 300 matches for FC Tirol Innsbruck, even though he had two breaks.

Jakub – the experience gained during his player and coaching career was beneficial not only for Jerzy himself but also for his family, in particular his nephew – Jakub Błaszczykowski. The current head coach of the Polish national team played an important role in the life of the several years younger midfielder.

Key player – the fact that all of the subsequent coaches entrusted him with the captain's armband says a lot about the personality of Jerzy Brzęczek. He was the leader of both the club and the national team. – I was the captain of every team that I played for. I knew the responsibility that rested with me – said Brzęczek in one of the interviews for "Przegląd Sportowy".

Loew – in his long football career Brzęczek has met a lot of interesting personalities. We have already mentioned that in FC Tirol Innsbruck he shared the locker room with Stanislav Cherchesov. Meanwhile, in the 2001/2002 season, Joachim Loew, the current head coach of the German national team, joined the club as the coach.

Meisterschaft - the three men contributed strongly to the fact that the team of Tirol Innsbruck won the title of Austrian football champion (Österreichische Meisterschaft) for the third in a row. Jerzy Brzęczek contributed to two of them, those in the seasons 2000/2001 and 2001/2002 - which was the third and the last championship that he won. Even before he moved to Austria, he enjoyed the title of the Polish champion as a member of Lech Poznań.

Natural leader - even the charismatic Janusz Wójcik perceived Brzęczek as the natural leader. Even though Jerzy is a quiet man, he exudes self-confidence. He never had to speak too much, his colleagues listened to him anyway. Both on and off the pitch.

Olimpia - the player took his first steps in the junior teams of Olimpia Truskolasy; then he was transferred to Raków Częstochowa. His play at Jasna Góra impressed the representatives of Olimpia Poznań where he was playing for four full seasons and after the beginning of the fifth season, he moved to Lech.

Pope - due to his attitude, temperament and leadership qualities, he was nicknamed "Pope"; even though, as he says, he learned about it many years later.

Quitters never win, winners never quit - in the spring of 2009, after 20 years of playing at top speed, 42 matches as a member of the Polish national team and hundreds of matches in the Polish league and Austrian Bundesliga, Jerzy Brzęczek decided to end his career. One year later, he returned to Raków as a coach and started the work which was now appreciated by the Polish Football Association which handed him over the helm of the most important football team in Poland.

Raków - the red and blue team was the club in which Jerzy Brzęczek was training to play at the highest competition level in Poland. The current head coach of the Polish national team returned to his former club after several years, however, not as a player but as a coach.

Strejlau - Jerzy Brzęczek has worked with many coaches. Certainly, he remembers Hubert Kostka very well. He ignored his young age and gave him the captain's armband. He also performed an important function in FC Tirol Innsbruck led by Joachim Loew who did the same thing as Kostka in Olimpia. Andrzej Strejlau was equally important. He allowed the twenty-one-year-old player to make his debut in the Polish national team.

Truskolasy - due to his career of player and coach, nowadays, the town of Turoklasy is associated with Jerzy Brzęczek. The current head coach of the Polish national team was born and started playing football in that small town located on the Pankówka river.

Undeniable recognition - but also respect. He knew how to win people over everywhere, which was noticed by successive coaches who gave him the captain's armband, as we mentioned above. "First of all, he was a real leader. On the pitch, he controlled the whole match and had huge respect, not only because of his earlier career but also because of his manner. His natural friendliness and selfless support... Everybody was delighted with these qualities" says Jacek Trzeciak, a colleague of Jerzy Brzęczek with whom Jerzy played football in Polonia Bytom.

Wembley - Brzęczek is also the last member of the Polish national team who disturbed the peaceful life of the English in their English football temple - at the Wembley Stadium. Previously there were two white-and-red scorers at that legendary stadium - Jan Domarski and Marek Citko.